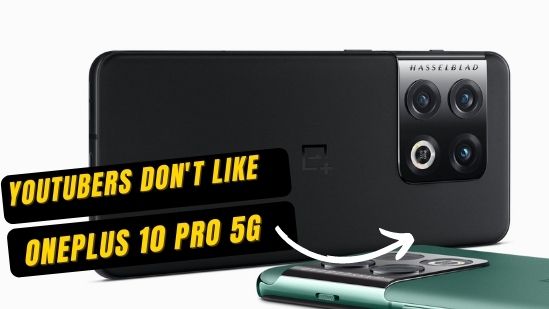 OnePlus has recently launched the latest smartphone OnePlus 10 Pro 5G. But many people are upset to see Color OS in OnePlus phones. Because Color OS is Oppo’s custom OS. And OnePlus is a premium smartphone, most of the customers buy OnePlus smartphones to use Oxygen OS because Oxygen OS is the best custom OS in the Android operating system.

And on 27th January 2022, a video is uploaded on the YouTube channel of the popular Tech Youtuber Tech Burner, in which Tech Burner explains that he did not like using the OnePlus 10 Pro 5G as much as he was expecting.

What Did Youtuber Say About Oneplus 10 Pro 5g?

Youtuber told about Oneplus 10 Pro 5g that he liked to use Oxygen OS which was available in earlier Oneplus smartphones. Oxygen os was more optimized than Color os and also good for a user. He also explained that earlier OnePlus smartphone became famous only because of Oxygen OS because Oxygen OS was giving a better experience to the user than stock Android.

Also, he said that while gaming in Oneplus 10 Pro 5g, he got to did not see any frame drop and he also faced some problems while scrolling. Techburner said that the quick and smooth user experience that was found in the earlier devices of OnePlus, he did not get the same experience in the latest smartphones of OnePlus.

Apart from this, Techbrunner has also told about the camera, display, performance, etc. of Oneplus 10 Pro 5g. He liked all the features of this smartphone apart from the color os.

OnePlus merged Oxygen OS with Oppo’s Color OS. There is no answer to why OnePlus did this. Because no official statement has come about it from OnePlus. But all the fans of OnePlus are not liking it at all. OnePlus is optimizing Color OS in smartphones in its own way, as Color OS is not as good as OnePlus’ Oxygen OS.